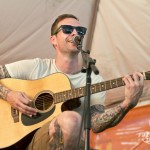 This interview was originally posted on Sound Revoltuion, 08/05/13. In addition to fronting legendary punk bands I Am the Avalanche and now defunct The Movielife, as well as starting new band Peace’d Out, Vinnie Caruana has just released his first ever solo EP. We caught up with Vinnie on his European tour for a quick chat about his bands, new material and […]