This article is written by Jordan from Circle House Records and features his musings on cassette tapes. It also features thoughts on the matter from Nick who runs Hanger Records. Both Circle House and Hanger have recently turned one years old and have each released some brilliant records from bands across the UK. They both mostly release on cassette. 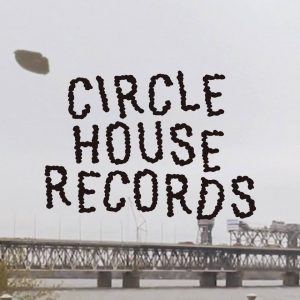 We all know that in recent years digital and CD sales have fallen and even pirating music online isn’t as popular as it used to be. Instead streaming services such as Spotify, Apple Music and Bandcamp have somewhat replaced it. However, people from all ages and backgrounds are buying vinyl LPs and EPs – some of the main reasons being great sound quality and also having a physical copy. In particular the albums they really love get picked up from the local HMV, and yes sometimes this means those records never get played but only the inserts get looked at whilst the sleeve sits up on a shelf next to all those DVDs that amounted in the house throughout the 2000s (a topic best saved for another article). However, there’s something uniquely satisfying about owning a tangible piece of music you really love. Also for the fans and admirers of the releases it’s a way to support bands and labels at a time when there’s just not that much money to be made in making and releasing music.

This brings us onto tapes and why we use them for Circle House Records releases. Since their conception cassettes have always been an important part of DIY music scenes because they are a cheap yet interesting alternative physical format to release music on. Pressing a record on vinyl often means you have to get around 300 copies made which costs lots of money and also takes a lot of time. However, when doing a run of tapes, Circle House can get a smaller amount of copies without seeing the unit price soar. So most of our releases are made at reasonable prices and then they can be sold to fans for affordable prices also. It’s beneficial to sell affordable products because wages and disposable income being low makes it harder for people to collect physical copies of their favourite releases – particularly on vinyl. That money being put back into the DIY punk scene gives momentum to the artists and labels, and gives them a good groundwork on which to build.

We spoke to Nick who runs Hanger Records – a London based cassette label who have released great music from the likes of Wallflower, Broadbay and Murderhouse. He talks about beginning Hanger: “I had already been toying with the idea of starting a label for a while but never really found the right time launch it. My band, The Ne 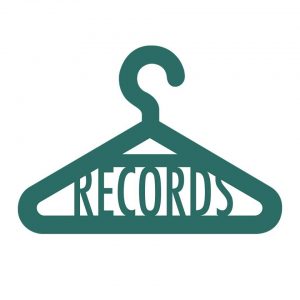 w Tusk, already had a release out on vinyl and digital earlier that year and I was messing about with cassette tape layouts for it. Mainly to get better at graphic design but also I had a feeling this could be a good place to start up the label, especially as there wouldn’t really be any external pressure or time frame to work towards. Then it hit me that Cassette Store Day was happening in a few months time… perfect!  The release got a pretty good response and overall I think it helped give that release another push and obviously helped start up Hanger Records.”

He continued: “I assume some people will now ask the question why release something on tape if it’s already out on vinyl? Well I can see the concern; especially taking into account the recent vinyl resurgence. However, I think tapes are slowly and steadily on the rise too. For labels and the bands/artists involved, it’s a format which you can manufacture for cheap and sell for the same price as a digital download. And for the fans it’s a physical format they can cherish. Whether or not they actually use it, who cares! At the end of the day it’s a collector’s item. I think more of the concern should be on streaming these days which seems to be completely taking over how the majority people consume music; however I think they’ll always be a love for tangible ways to consume music. I’m also seeing more and more labels including cassettes in their release formats, and not just small labels that can’t afford to make the big gap to vinyl. Take big indies like Domino, who released Pool by Porches last year that included a cassette release alongside vinyl and digital. What’s even more encouraging is the alternate/demo version of ‘Pool’ titled ‘Water’ just saw a cassette and digital release. So the demand and interest is evidently there.” 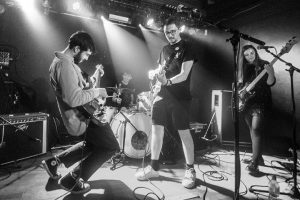 The band we have worked wit most is Nottingham emo punks Taco Hell. Their debut EP was our first release so we learnt a lot from them just as they did about being a band. We’ve wanted our releases to not just be a cassette in a case but create a package we’re proud of that makes the physical copy even more of a special collectable. For that first Taco Hell EP we included vegan taco recipes on the inlay and also added a deluxe edition which included handwritten lyric cards. The cassette for the Young Adventurers EP we splattered with red paint to give it an attractive finish and for the Phaedra’s Love debut we had an optional addition of a handwritten zine about mental health. 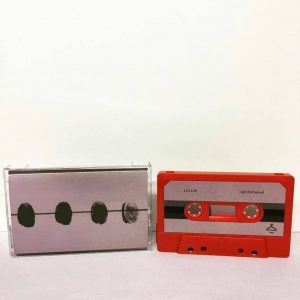 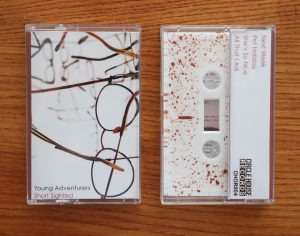 Nick from Hanger has done two releases for Wallflower now and says that “I’ve been fortunate enough to work with them on their EP Where It Fell Apart. The EP came out earlier this year (vinyl and digital), and again I think it gives the release a nice little push and gives people an alternative format to get their hands on. We’ve had such a good response so far from both fans of the band and shops wanting to stock it. For me, helping bands/artists out designing their packaging is probably the most enjoyment I get out of the whole release process. You can fit just about everything you want to on an inlay, even lyrics for a whole album if you use both sides! If anyone’s been following the label too they’ve probably picked up on the three coloured lines printed across our tapes, which has become our recurring cassette label design. It’s inspired by older blank tapes I’ve seen about but with our own spin on it. We always tie it in with the colours used on each release, and I guess it’s just an easily recognisable stamp.”

Let’s talk about tape players – how can you can get your hands on one and what sorts? Well you actually probably already have one somewhere in a family home. When my old band Splitsville released our debut EP through Crust Baby Records (RIP) I rummaged through my parents’ garage for this: 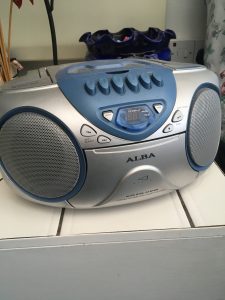 This IS something I got from a car boot sale when I was about 7 years old. It’s a pretty common combo player to find in charity shops for anything from £1 to £20 – I actually recently came across the exact same one in a British Heart Foundation! Originally this was used for an audio book of the Hobbit and now here I am years later using it to listen to punk records! Once I upgraded I handed this over for a while to my uni housemate Tim who solely used the tape player section for his one tape – Muncie Girls ‘From Caplan to Belsize’. It now lives in my parents’ sunroom to play Sam Smith CDs. Welp.

My next player became: 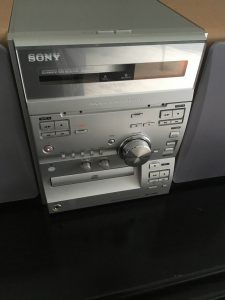 This all-in-one system belonged to my grandma and sat in the corner of her flat to play old country and western cassette tapes and the odd Doris Day compilation CD. Things like this you can find in many charity shops and second hand/pawn stores such as ‘Cash Converters’. Depending on the brand you can end up paying anything from £1 to £40. However if you’ve already got a separate hifi system, you might want to go for a separate cassette deck which you can slot in. Here’s mine, the middle unit on this stack: 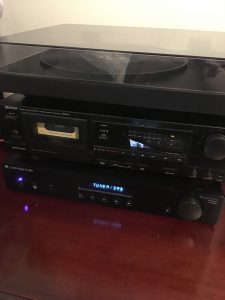 This is my Denon tape deck. It hooks up to an amplifier (below the tape deck) and then out to your choice of speakers. You can spend anywhere from £20 to £100, or even more, if you’re really keen for a great setup. The best places for these are second hand stores, hi-fi shops or eBay. I got this one for £30 from a second hand hi-fi shop in Exeter called The Emporium. The owner, John, is a true 70s hippy who loves his music loud and showed me what I needed.

As well as all the places I’ve listed of course the web is a great place to go hunting about and research into a tape deck. Nick says “I purchased my first cassette player early last year, which I picked up off eBay for £35. Set up alongside my record player, it gets just as much use! I’ve amassed a small collection of tapes since.” 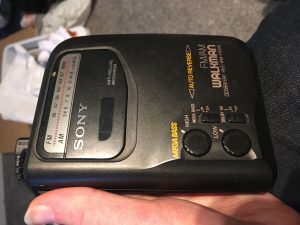 Finally I cannot fail to mention the classic option:

Not just the Sony Walkman but all kinds of portable cassette players are pretty handy if you’re a backpack or tote carrier. Even strap it onto your belt. Make a DIY wallet for a couple of your favourite tapes, have your best earphones ready and off you go – really easy to use. These can be your cheapest option at times in a charity shop – this was bought for me recently for £1 from a Hospice Care. You can also pick up a new one for about £15 on Amazon.

So there you have it – tapes have become a great way of rekindling a love with physical formats of music and supporting your favourite artists and labels. Plus with easy access to players on most high streets and now so many records getting a cassette release it’s not too hard to get involved. Hope you picked up some great treats on Cassette Store Day!