My first band was formed when I was around 15 years old at a house party. Anyone within our circle of friends who played an instrument was encouraged to bring it along to “jam.” What an awful word and awful way to describe something that is sometimes not awful.

The guy whose house it was had been playing drums for a while, to the point where he owned a drum kit. The rest of the instruments set up that fateful night were a keyboard, some guitars and a few microphones. It was an awkward mess of too many people not knowing enough songs between them, maybe getting to the second chorus of “Smells Like Teen Spirit” but not much further. I remember arriving with drum sticks in hand, whilst this was well underway. 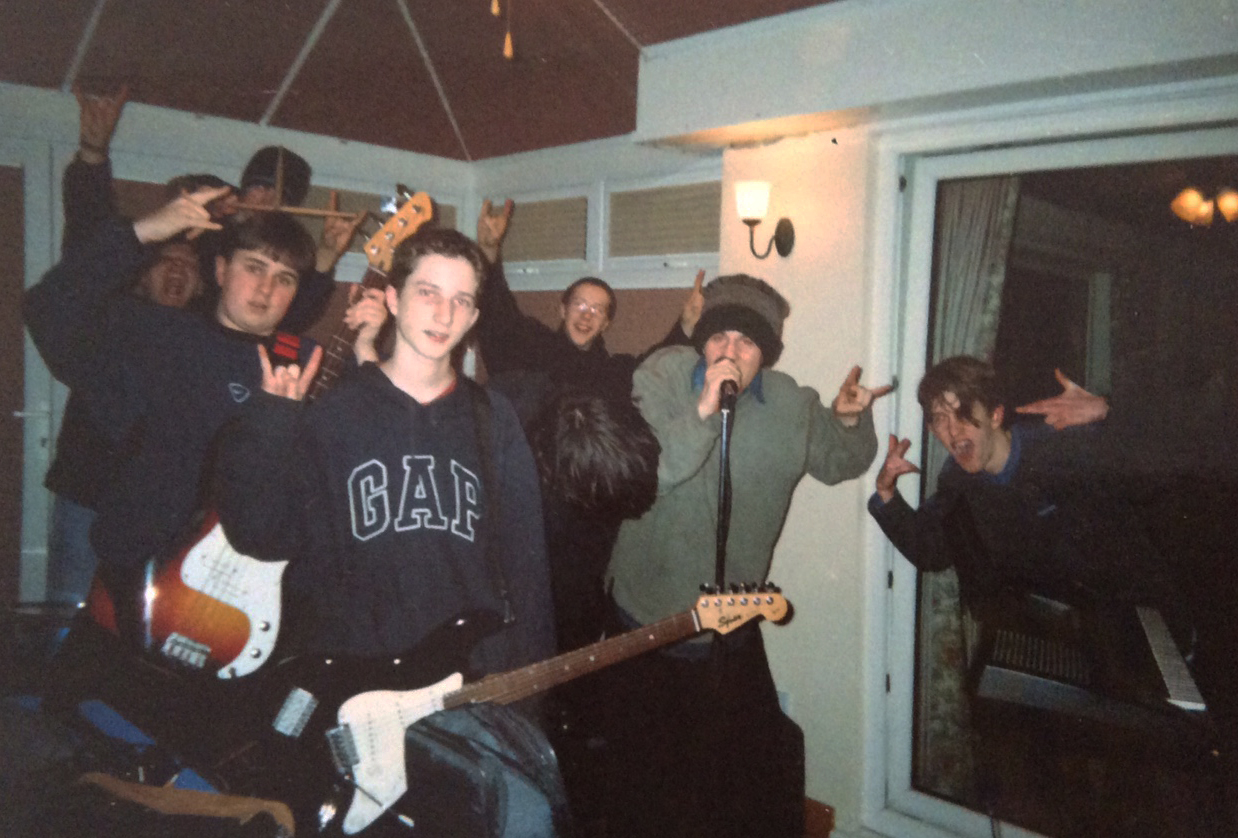 I had been getting lessons for at least a year at this point, did not have my own drum kit, and didn’t really make it known that I played drums; the plan being that at some point, like Garth in Wayne’s World, I’d just sit behind a kit and blow people away with my mad skills. To a certain extent that happened that night, but I’m sure everyone who was there remembers it differently.

I was a casual observer for a while. The makeshift band working through whatever Green Day or Silverchair song someone knew enough of. The drummer, whose party it was, gave up his seat to get a drink or something. He walked out, and I walked into the next 15 predictably wildly unpredictable years of my life. I sat down at the drums. Eye contact was made. Knowing nods given. We launched into what was probably a Feeder song and the deal was done. I was now the drummer in a band. The keyboard player did not last beyond that first night, and for a while the band even had two bassists, because neither wanted to quit. 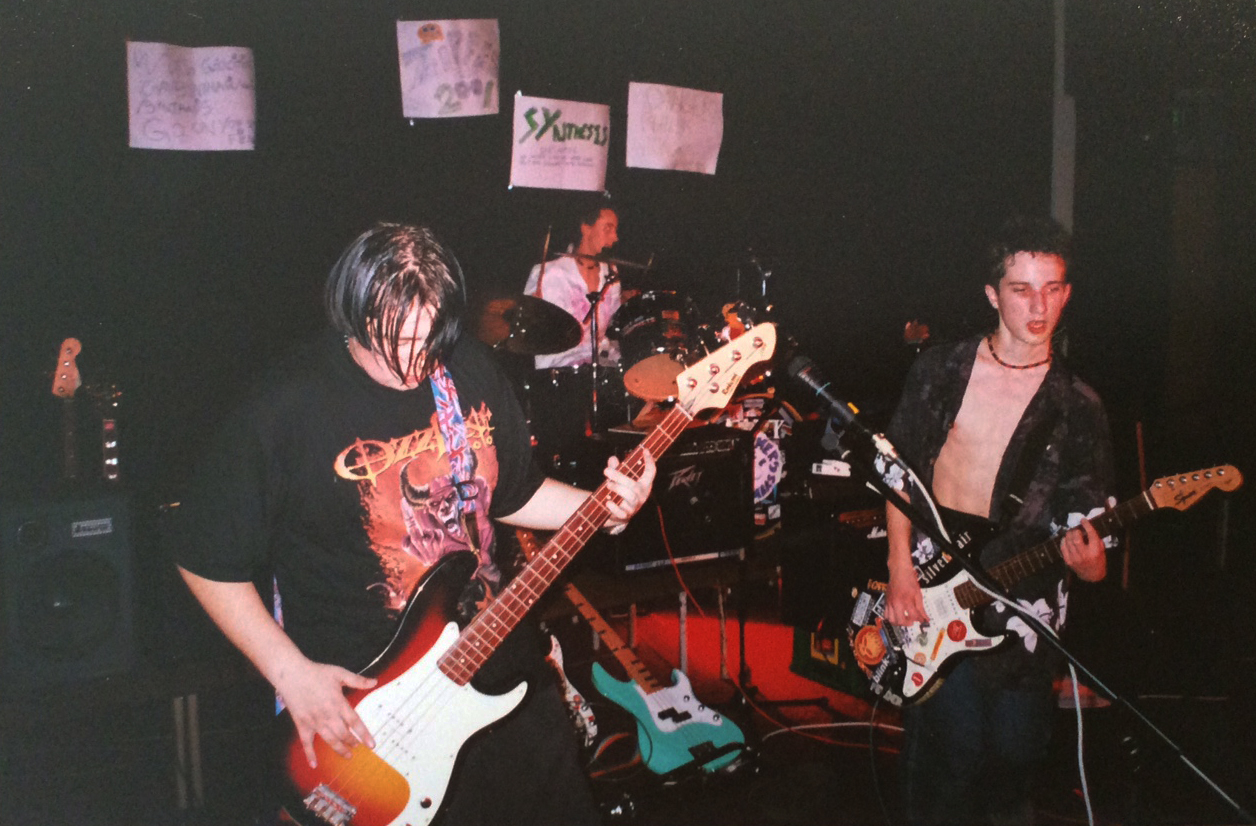 Once a more stable line-up was established we’d meet up at each other’s houses, or the music department at our school and work out songs. Our first song was about something to do with farm animals and sexual acts. Blink 182 were cultural ambassadors at the time so that’s the excuse there. Our first set consisted of covers of Green Day’s “Hitchin’ A Ride”, The Hives’ “Hate To Say I Told You So”, the Marilyn Manson version of “Sweet Dreams” and a few originals. We wore massive cargo jeans, stupid hats, wallet chains and one of the guitarists had flames painted on his guitar. We even won our school’s Battle of The Bands (the prize being a still unclaimed £10 voucher for a local guitar shop – I have this if you want to split it guys?).

That was the early days of 2000, and in 2015 we amicably laid the band to rest. We put out a few albums, toured a bit around the UK and Europe. Made friends. Lost friends. Spent an inordinate amount of time and money on something that constantly shifted. To begin with it was fun. Then you start gigging and it becomes more about organisation and logistics. Then you want to record and it gets about money and the battle of ideas and egos. Then you do it all again, each time trying to go bigger and better than the last time. For 40% of our lifespan we went bigger and better, but a good 60% felt like a lot of running in circles, learning and changing. All while we were trying to live our lives with universities, jobs, girlfriends (or not), growing up, and all that malarkey.

There really are no rules or guides to being in a band successfully, the path is different for everyone and what you see as success more often than not is more down to luck and good contacts than good old fashioned talent. However, even just starting a band can seem impossible. How do you write songs, how do you get gigs, how do you start a band?

STARTING A BAND – AN ACTUAL GUIDE

Step one – Find some friends (actually, they don’t even need to be friends, you just need people willing to show up). Ask around, check posters in music shops or look online. Be careful of weirdos!

Step two – Learn an instrument. Owning one is not essential, you can borrow or rent whatever you want to play.

You don’t need to be any good at playing an instrument to start, and don’t worry if you’ve never had lessons, you don’t need songs or anyone’s approval. If you want to do it just start doing it. You get good the more you do something. You’ll start out not so great but it’s the excitement generated by creating something new that’ll make people interested.

Step three – Find a rehearsal space where you can make as much noise as you want. Ask around, check posters in music shops, or look online for this.

A good rehearsal space will have the following included in it’s hourly rate:

– Drum shells + hardware (you’ll need to bring your own cymbals, pedal and snare. But most practice spaces will include this at an extra cost).
– Speakers and microphone for vocals.
– You may also be able to hire amps for guitars and bass, etc. But, you’ll need your own guitars (and leads to connect them to the amps, get some plectrums too, if that’s your thing).

You can practice to your heart’s (and budget’s) content knowing that the only person that’ll be annoyed by the noise is the guy who works at the practice space as they heat up another pot noodle and sit on Facebook.

Step five – Write some songs… Or just learn some covers… Or just hit the demo button on a keyboard, don the unitard and express yourself through dance, I don’t make the rules.

I got my start in a band by playing songs that we all collectively knew. If you are brand new to making music with other people then this is a great way to teach each other the processes. Find an easy song that you all know or can learn. then, learn your parts and try to play it together.

CONGRATS! You are now a band. Once you’ve gotten used to doing that then start writing your own stuff. Don’t worry. If this is your first time you’ll be shit for a bit. Nothing wrong with that either, even One Direction had to start somewhere and now look at them.

Making music and performing can be a way of processing emotions in a way that you’ve not been able to do before. Most first bands happen when people are teenagers: the ultimate melting pot of people being completely unable to deal with emotions, whilst riding high on a heady mix of every emotion all at once. It’s total freedom for you to say and act however you want. If you have something to say beyond “I like this girl/boy/object but she/he/it doesn’t like me” then this is your chance. Work out a clever rhyme for “Working Tax Credits” and off you go.

Step seven – Tell your parents you’ve decided to sack off uni and be a in a band.  They’ll be overjoyed.

Step eight – Start a savings account and put at least £100 a week in there for a “rainy day,” or “your van breaks down in Sweden day,” or “your guitar and amp no longer work for absolutely no reason and you have a 3 week tour starting tomorrow day.” There’s so many to choose from! Being in a band is a sure fire way to completely obliterate any disposable income you may be lucky enough to have. This is better than a pension, so just shovel all your spare cash into the band.

You are now in a band! 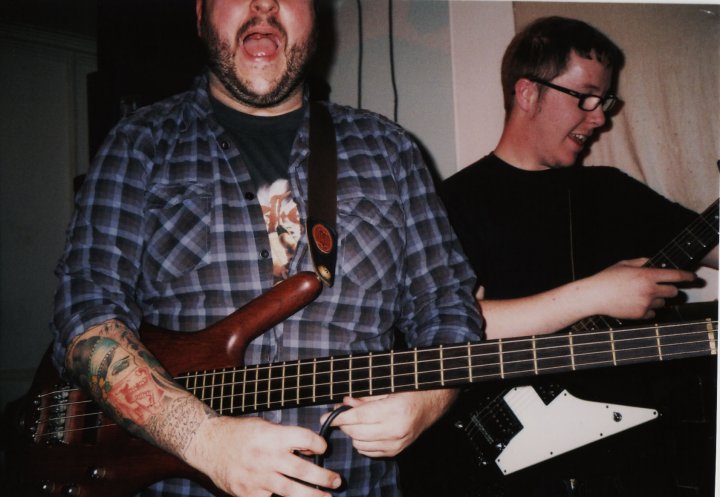 Whilst writing this I got distracted by the internet (if you can believe that) and found this quote from Squarepusher (a right good head melter of a musician who does clicky electronic madness, check him out). He said “I got fed up with being in bands as a teenager. The whole format seemed stricken with creative inertia and conservatism. And the idea of negotiating with other people in order to get music made seemed like a massive waste of time when there was an option of doing it with electronics.”

Although this reads as a grumpy recluse who is probably a bit of nightmare to work with, he makes a good point. Totally make music on your own and nothing should stop you from being creative. Whatever works for you is the route to take.

That being said, one of my favourite aspects of making music in a group means you are constantly collaborating and sharing ideas. What was the initial spark of an idea will never stay that way by the end, because everyone can bring their own flavour to the project. The growth of an idea beyond the single person is what is so satisfying about making music as a band. The quote exists because he’s actually started a band now cause he got sick of working on his own, so thanks for backing up my point there, Mr. Pusher.

PLEASE NEVER FORGET EVER EVER

Doing this should be fun. You should do this because you love music, then you find that making and performing music with other people is an unbeatable feeling. I don’t have the words to do it justice. No one does. It’s music.  It’s different to words and better a lot of the time.

Read: Motley Crue, The Dirt: Confessions of the World’s Most Notorious Rock Band – This fucking book. I read this when I was around 17 I think. It’s the ultimate “sex, drugs and rock & roll” deal. You want to start a band and be complete assholes, here’s your guide. It spawned a whole industry of gross men talking about how completely gross they have been their whole lives and how brilliant it all was. The reason this one still rides high in my opinion is down to the full and utter beating the universe gives these dingbells for their crimes. They ride on the back of a debauched snake through a world of selfish excess for 20+ years, only to be met on the other side with prison, being directly responsible for someone’s death, and pollution killing their children. Motley Crue put up a good fight, but the universe brings them the bill at the end of it all.

Watch: We Are The Best – “Three rebellious teenagers form an all-girl punk band in 1980s Stockholm.” Thanks Wikipedia! This is as good as a motivational video as you are going to get. It covers everything that the outsider punk goes through to make it on stage. Think sports are a waste of time? Check. Older kids in bands are jerks? Check. Doing something with your hair just to do something crazy with your hair? Check. Find someone who can really actually play their instrument really well to prop up the rest of you whilst you catch up? Check!

Listen: Ramones – Ramones – Concerned your music is not good enough? These guys recorded the same song over and over again with only 3 chords for 20 plus years. It worked for them, it’ll work for you.

Daniel England (the author) plays drums in a few bands including Isaac.

His first band was The Wickets.  They were a band for a very long time.
https://thewickets.bandcamp.com/

Posted in Features and tagged guide, how to be in a band, isaac, nottingham, punk.